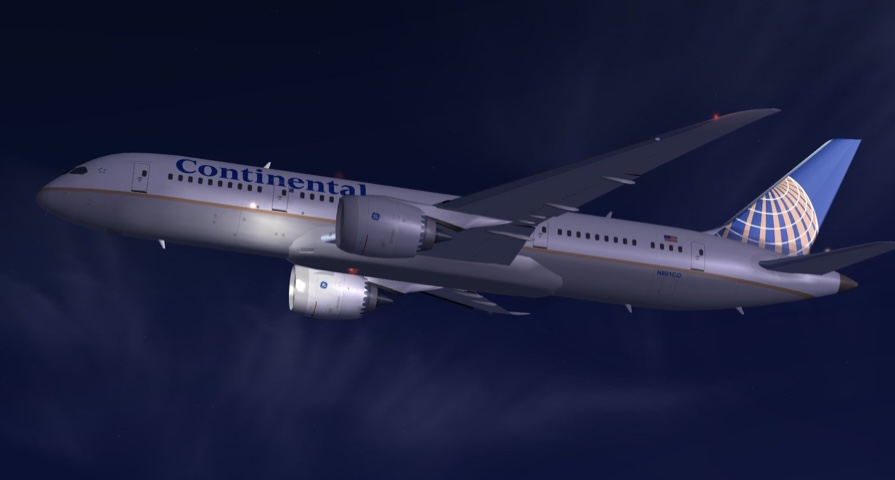 After my previous post, I had many request for stories on some more emergencies. This somewhat violates my  purpose for the blog, so these are my last posts on this subject. Maybe someday I might make a separate website for my other FAA experiences. I am also a licensed pilot as are approximately twenty percent of FAA air traffic controllers.

Coffee, Tea, or a Flashlight?

Laurie: “ I was married to Clint for six years when one evening in 2012 I walked into our home office and saw that he was clearing out his file cabinet. On the floor was a pile of papers and to my shock was a FAA Flight Assist Report dated December 4, 2001. I was the first class flight attendant on this Continental Airlines Boeing 737 on that December night. Until that night we had no idea that our lives were connected that night five years before we met. Small world!

This is what happened from my viewpoint: We were about twenty minutes out from IAH when I entered the cockpit with their coffee. Almost immediately the cockpit lights went out, to include all glass flight instruments. The first officer tried to retrieve the cockpit flashlight but was unable to pull it out of its holder. I gave them my mini flashlight out of my apron which I always carried on the night flights. I had never seen a cockpit go completely dark in the thirty years I had been a flight attendant. I was at one time a private pilot and knew we could be in trouble. I asked only one question, “will you give us an “Easy Victor” (code for evacuation) captain”? The captain simply said, “yes”. I left the cockpit and made preparations for landing. Except for the emergency exit lights, the lights in the cabin were also out!

About 30 minutes later we landed without incident and when we got to the gate the pilots stayed an unusually long time in the closed cockpit. I waited for my flashlight and when they walked out they were so sweaty wet that you could see their skin through their shirts. They were definitely stressed! ”

My Story:  I was in the break room and I was told to report to the Radar Room to do a radar approach (talk down) with a B737. I was told that the B737 was having navigational equipment problems. I didn’t know that they also had an electrical failure too. A Boeing 737 has a standby battery that will last only 30 minutes for communications (meaning: after 30 minutes no radio & no navigation equipment). I was the only controller on duty out of twelve others that knew how to conduct a radar approach (see PDF below). That night we had an overcast ceiling with base of the clouds at 700 feet and the visibility was 4 miles!

Laurie should have gotten an award for her mini-flashlight. The pilots needed a light to see the only instruments that were working. 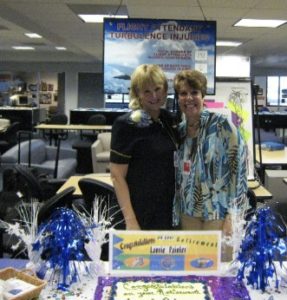 Side story:Laurie had some bad emergencies in her career: one plane crash where one passenger died and one hijacking in 1974, where a mental patient on leave from a VA hospital put a knife to her throat an hour outside of LAX.  She talked  him into dropping the knife and surrendering in the LAX terminal lounge (she stated that the scariest part was all of the law enforcement people had pointed their guns at them). The picture above was taken on the day she retired after 38 years with Continental Airlines.

The actual radar approach on a 3 minute activated voice audio that is speeded up:

My Letter to FAA HQ Two Years Before

My son Clay, is one of the few controllers that knows how to conduct a radar approach and he works at the FAA Terminal Radar Facility at IAH (where I retired).

A Swiftair B737 lost all instrument displays in 2017 after departing Shannon, Ireland. They were fortunate that the weather was good.

Is This Going To Be A Fatal Accident?

Around 9 pm on February 18, 2000, a Beechcraft Bonanza N89E during very low deteriorating ceilings (below 300 feet) and visibility weather conditions (1/4 mile) had attempted two ILS approaches, but was unable to navigate on the final. He then told the controller he only had 25 minutes of fuel left.

The supervisor called me down from the break room to conduct a unpublished Radar Surveillance Approach (just like I did with the B737). Before my headset plug could entered the radio jack, the controller said, “he just ran out of gas”! All controllers know this is the worst possible moment to plug into a control position, because of the possibilities of a fatal accident, a NTSB investigation, and even being sued in Federal Court by the survivors of the deceased. I didn’t have a chance to react when the controller grabbed my headset plug and plugged it into the position jack, jumped out of his chair, and the supervisor said,  “Clint do something!”

Most general aviation fatal aircraft accidents are caused by the pilot failing to maintain control and fly the aircraft. I could see on radar that N98E was in a spiral descent. He was losing control of his airplane. I am also a pilot. I had to get the pilot to stop his turn, start controlIng and slowing his aircraft !

I knew he was going to collide with an object below him and the slower and more under control the aircraft was, maybe they could survive; however, just by me telling the pilot to stop his turn put some of the responsibility on me. He was going to hit something immediately after popping out of the clouds! I put the aircraft in that direction when I told the pilot to stop his turn. Was this another example of synchronicity or me being at the wrong place at the right time?

This is a 2 minute audio on Bonanza 89E

The pilot of N89E phoned me two weeks after this event. He appreciated me telling him to fly his airplane, because he was distracted trying to restart his engine. The pilot told me that didn’t receive any injuries when he crashed into the upstairs bedroom. The worst part of the crash was that the airplane’s center of gravity made the plane fall out of the window to the ground. Getting out of his plane he dropped his owners manual on the ground. He received a minor cut on his hand picking up the manual by a piece of glass that had fallen into the grass from the upstairs window. That was his only injury. Not even a bruise. I asked the pilot what he did for a living. The pilot told me he was employed at NASA as a space physicist! 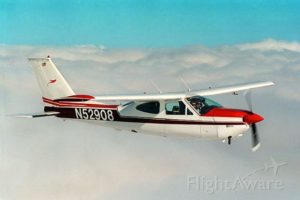 I left employment with the FAA in 1981 and started a business with a coworker. I kept the business, but I returned to my previous FAA facility eighteen months later. On my first day back in retraining I  was busy working over ten other aircraft in the Houston area when Cessna 56T a single engine Cardinal airplane pilot told me that he had lost his engine. He was in the  clouds below 3,000 feet descending over the TV antenna farm that are 2,049 feet tall. My trainer later told me to start collecting my Flight Assist documents and write a book! What transpired is also on the 3 minute audio: 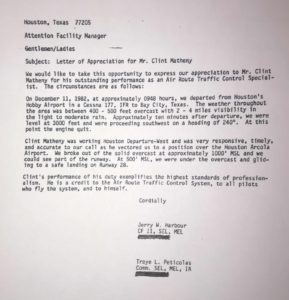 How far to the Gulf ? We need to eject! 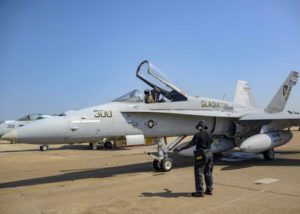 Around 8 am on the morning of February 4, 1998 a formation flight of three (3) US Navy FA- 18 Hornet fighter jets departed Jacksonville NAS in Florida enroute to Ellington Field here in Houston. Unknown to these pilots was that the thunderstorms in route would require deviations around these thunderstorms that would put them in a fuel emergency situation. In addition the primary navigational aid that they could navigate on for a landing was out of service. They also didn’t know that the weather was going to be a lot worst than forecasted. The ceilings within a hundred and fifty miles were below 500 feet and visibilities were 1 mile or less.

I knew from a previous experience with US Navy fighters that they are not equipped with the civilian Instrument Landing System (ILS) panel. This $12,000 instrument would been a safety backup, but the Navy bureaucracy failed to protect it’s aviators (see PDF Letter to Senator John McCain). All the right combinations for an accident!

Around 10 am I was working the South Radar Position that included Ellington Field. I was given a radar handoff 30 miles east and my first thought was “what the hell” how are they going to land?  The ceiling was 400 feet and the visibility was 1/2 mile with drizzle and fog (the best weather in the Houston Airspace). I immediately called Beaumont on a landline to see if they had better weather. They did not.

The flight leader called 25 miles out and I asked him, “ The TACAN is out of service, did you get the weather, and what are your intentions?” The flight leader stated, “ please vector us to the Gulf to eject we have less than twenty minutes of fuel. How far to the water?”

I transmitted, “will you accept an unpublished Radar Surveillance Approach that we might have to bust minimums to land?” He stated, “ Affirmative!” I vectored the formation to a eight mile final, descended them to 400 feet, and at one mile from the runway to 300 feet (200 feet above the ground). They saw the runway on 1/2 mile final and landed.

The tower controller at Ellington phoned and told my supervisor that one of the fighters had run out of gas on the taxiway. I saved the Navy’s (3) FA-18s worth $87 million dollars (3 X $29 million each) and possibly injury or death to three pilots.

Most controllers work for thirty plus years without having an emergency requiring talking a pilot down to the runway. Letter below shows (6) aircraft emergencies in an eleven month period and are the documentation for the (3) F-18 Hornet emergencies. I retired from the FAA in May 2004.

My Email: Clint77090atGmail.com
Back to Top